Sun And Snow In Rossfjord

Sarah has popped back to England for a week to visit her mum and Hannah, so I’m on double duty.

My main responsibility this morning was a funeral in Rossfjord. The organ was ‘interesting’ to play as several pipes were badly out of tune so it meant re-arranging the music ‘on the fly’. The extremely dry winter air makes the wooden pipes ‘shrink’ a bit and then some of the tuning stoppers lose their grip and slide down, causing problems (sometimes whilst playing).  Today’s other ‘pipe problem’ left the church toilet out of commission. Apparently whilst the inlet pipes have a heating wire around them to prevent freezing, waste outlet pipe don’t, making the whole system unusable. And in the winter there’s no option to find an “outdoor alternative” as there are several feet of snow in Rossfjord!

Despite the frozen pipes, we’re experiencing relatively mild weather (only -13C / 9f in Rossfjord as opposed to the -24C / -11f Sarah experienced there 2 weeks ago). However, the conversation in the sacristy beforehand was typically Norwegian: lighthearted bragging about who had been involved in the coldest funeral (I think -31C / -24f was the winner)!

Here are some pictures. Several were taken after midday in a spot where due to the mountain topography the sun only rises after lunch. To the right of the last picture you can see tire tracks where people drive on the lake. What an interesting place to live.

Yesterday dawned pink, as we jumped in the car for a family trip to Tromsø, to take our prize winning Susanna to play in a concert as part of Nordlys Festivalen (The Northern Lights Festival), which includes very prestigious events with visiting ensembles such as the Bolshoi Ballet and The Symphonic Brass of London.

Susanna received an invitation to play in the Kommende Stjerner (Upcoming Stars) concert, after competing in a sort of Young Musician of the Year competition. The standard was extremely high, and Susanna is now playing music with accompaniments so hard her parents are no longer competent to play – hence the Russian accompanist!

Pictures were taken in rehearsal, and then at the end of the concert, when, in Norway, the performers receive a rose.

All in all en flott konsert – well done Susanna.

Colour From Black And White

On Saturday 8th February, I am pleased to announce that Christopher will come to Finnsnes. The concert is perhaps aptly titled Colour from Black and White – not only because we plan a musically colourful concert played on “ebony and ivory”, but also as a nod to our photo-based blogs, Arctic Organist in colour and The Yorkshire Viking in black and white.

The program is not completely finialised yet, but will last around 1 hour and is likely to include:

Finally the sun, just for a few minute, in the ‘saddle’ between two peaks. The pictures are necessarily underexposed to allow for the brightness of the sun – in reality it was much lighter!

One of the effects of the long period of very cold but settled weather we’re experiencing is that the bank of ‘sea fog’ which has been hovering over the sea round some areas of Senja, has sat for at least a week (see the last picture here). From a distance it’s beautiful and looks dynamic, but for the folks who live on the sea shore their only outside view is the cloud, which also means it’s been dark and cold for them. And it’s held it’s position pretty accurately with a clear boundary at he water’s edge.

What, still no sun?

Yup, that’s right. The sun may have ‘got his hat on’, but is now acting shy, 4 days after we should have seen it, we’re still without a glimpse!

On Monday it barely missed the horizon (had we been a few hundred feet higher we’d have caught it):

And today, despite a beautiful sunrise and sunset, we were once again sun-free, due to cloud. Oh well, there’s always tomorrow.

The Day Before The Sun Comes Back

Tomorrow the sun (should) return and polar night will be over.

Today on the way to Sandbakken Kappel on Senja I found a ‘high spot’ to take a 360 degree picture to try to show the band of colour which runs around the horizon, although the camera doesn’t really do it justice; some how the colours are a bit lost. The last picture is the sea fog which, whilst looking very ‘dynamic’ and perhaps a little threatening, just hangs around for hours, sometimes days at a time.

Technically we got the sun back in Finnsnes on Monday, but due to the surrounding mountains we wont actually see it until next Monday. However, we are getting an indirect glimpse as it illuminates the peaks of ‘our’ mountains. Ironically due to some complex geometry (positioning, height and topography of the mountains, and the arc of the sun), the nearby lower peaks are in sunshine for longer than the highest peak. I did wonder about trying to plot it on a map, but we’ve got a visiting youth evangelism team arriving very soon. And if I was much better at skiing I would take a trip to the top of the highest mountain and take a 360 degree picture so you could see the band of light which runs gold through deep pink to iridescent blue around the horizon – quite amazing!

Strange Signs In The Sky

The weather forecasts in Norway use some unusual (unique?) symbols. So, the question to our ‘foreign’* readers  is, what do they mean? 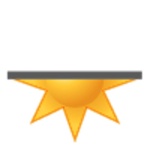 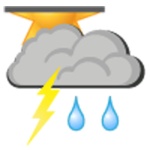 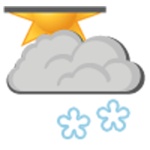 *ie, those who don’t live in Norway!

As we prepare to get the sun back, there is a period when, if the sky is clear, there as a band of pink above the horizon, making the mountains look photos, cut out and stuck onto cardboard, like the scenery from a bad amateur drama. Today is one of those days. And temperatures have tumbled more than 20 degrees since last week: (today we ‘maxed out’ at -15C / 5f which with a bit of wind felt more like -23C / -10f, so we’re breaking out the winter undies.