I spent the weekend in Tromsø with most of our church leadership team as part of an Agenda 1 course. Agenda 1 is a church network, helping congregations and para-church groups find God’s vision for them, develop ways of moving forward in the vision, and very importantly, holding leaders accountable for implementing their plans!

As well as an intensive and exciting time together at the conference, we were also treated to a stunning display of norther lights (nordlys). Tromsø lies right in the middle of the belt of highest aurora activity, and is very popular with tourists wanting to experience them. Whilst Finnsnes is only about 45km / 30 miles south of Tromsø the way we experience the aurora seems quite different.

Initially there was a long period with the most common green ‘ribbons’ or ‘bands’ of light:

Then suddenly directly overhead came a very intense display, a bit like being in a shower: as well as green, there were purples and even white colours. Some people refer to this type of activity as aurora coronas. It probably lasted less than a minute and by the time the camera was set-up the it was already dying down and I only got 1 picture.

To give a better impression of the experience, I’ve “borrowed” a couple of pictures from other websites which gives a much better sense (although it wasn’t taken at the same time)!

The village of Sandbakken on Senja is accessed by a very long, straight road with lots of blind summits and a very bad surface. On the way back from a funeral in the chapel there today, I was struck by the way the poles, both power and way markers just go and go: almost an invitation to some off road slalom, once the snow properly arrives. . . .

And their rivers are almost completely frozen already:

Water – everyone must have water! That’s the theme song for Norway’s ‘TV Action’ in 2014. TV Action is a national TV based fund raising event (a bit like Comic Relief in the UK), and this year the charity to benefit is Kirkens Nødhjelp (The church’s emergency help) and specifically aiming to provide clean water in Africa, Afghanistan and Haiti. Their slogan is Vann Forandrer Alt (water changes everything).

Our local prost (rural dean) came up with the idea of a “water concert”, inviting choirs for the local area to sing a couple of songs each on the theme of water and finishing with everyone singing the theme song. After ward there was a mini international cafe. Everyone went away happy and well fed. The concert raised about 20000 NOK (2000 pounds / $2800).

Here are some pictures taken by one of our young people (Sarah and I were busy with technical stuff, and running the kitchen): 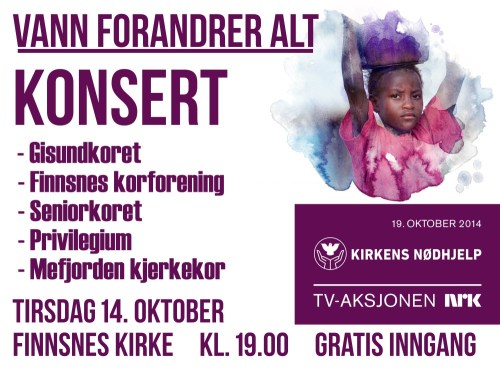 There is not a huge range of bird life visible in Finnsnes, especially as winter draws in (mostly crows, magpies and the odd sparrow), but today a very handsome pair of blue tits (blåmeis) were active just outside our office windows.

Another distraction came in the form of a lorry with the special automated system for installing the red marker poles used to guide snowploughs. Fascinating to watch . . .

Yesterday I wrote that we had just changed to brand new winter tires.

Today, I was very glad we had! Winter tires with studs in are great on snow, but driving on asphalt, either wet or dry one must reduce speed and allow more time / distance for braking as they don’t grip as well as ordinary summer tires. Driving to Rossfjord to play for a funeral I initially felt the car slid a little as I braked on what appeared to be a wet road, so I slowed down more. Then a bit later I pulled off the road to take some pictures and experienced the same thing. However, on trying to get out of the car I quickly discovered the road wasn’t wet but covered with a sheet of ice, making it pretty difficult to stand. So, the rest of the journey was even slower. Had we not changed tires, I would certainly have ended up in a ditch. PTL.

Here are some of the pictures. The low cloud and mist, combined with sub-zero ground temperatures was the reason the road was covered in ice:

The weather here has been very changeable the last couple of weeks. After flat calm last Monday / Tuesday / Wednesday morning, came high winds and an icy blast. It pretty much stripped all the remaining leaves from the trees, and by Saturday the temperature had dropped enough to freeze Finnsnes Vann (the town lake), initially thawing in Sunday’s sun, but then freezing over again at night, followed today by a bit of snow.

Wednesday is the first official day of winter here in the north, in so much as it’s the day for changing your tires over for the winter, although the highways authority (you know, the people with the very expensive loo) have been advising people to change in good time, so today we bought new tires for our car.

Last Monday, a flat calm sea, disturbed only by a passing boat (from Bjorelvnes looking over the sea towards Gibostad on Senja):

The same rowan trees before and after Thursday’s high winds:

Finnsnes Vann – only partially thawed after a sunny Saturday:

Pictures taken on the way to Heggelia kapell in the neighbouring parish of Malselv, after a hard frost and freezing fog on Saturday night:

Room With A Do

Oh, how lucky we are : the good folks at Statens Vegvesen (the highway authority) have commissioned Norway’s most expensive public convenience, currently under construction, not far from us, on Senja. And the price tag – a very ‘reasonable’ 3 million kroner (1/3 of a million of your great British pounds / half a million dollars). The reason it’s so expensive is that apparently they used an architect to design it (although I think that it’s probably mandatory to use an architect when building a public building).

Nestled in Ersfjord (population 28), beside possibly the most beautiful beach in Troms county the beach (we visited on our staff day out although then the new project was but a concept on the architects drawing board), the facility boasts:

Apparently it’s expected that the new toilet will bring in extra visitors (hence the large car park), benefiting the local shop (located about 5 miles away), the local pub (half an hours drive) and other businesses (mostly deep sea trawlers). It’s worth noting that the new toilet is located only about a mile from Norway’s previously most expensive toilets at the viewing area for The Devil’s Teeth. Therefore they’re presumably counting on a steady stream of architectural savvy, ‘leaky’ visitors (for example bus loads of retired male architects). Or maybe they’ve realised that there’s always someone in the car who should have gone at the first stop with everyone else, but who just has to go immediately after leaving the rest area . . .

Anyway, here are some pictures I took a couple of weeks ago as I drove past (having not stopped to buy anything at the local shop):

Here’s what remains of the previous toilet (worryingly the new toilet is not anchored with steel cables to the bed rock, so perhaps best to avoid visiting in high winds):

Here is an artists impression of the finished project, and a snow plough for comparison:

And finally, here are some of the other many titles I could have used for this post. Do feel free to leave other suggestions . . .

Isn’t it great that do, loo, new and pooh all rhyme?

N.B. Do is Norwegian slang for toilet.

Today, was a very calm day (at least wind wise). This worked out well for us as we took our barnekor and ungdomskor (junior and youth choirs) to Tromsø on the hurtigbåt (fast boat), to sing at a big conference. Due to the sea being almost as still as a mill pond, we only had one person suffer mild sea sickness.  More on that trip soon.

In the meantime, here are some pictures of Finnsnes Vann (the town lake) taken first thing this morning, and then as night fell. The only ripples were generated by some ducks:

Today the NRK (national state TV) website mentioned a new time lapse video on You Tube.  I had a quick look and it’s amazing! It features locations from all 19 of Norway’s counties and was shot over a 5 month period. I recognised some of the locations shown as local to us:

You can also read an account of the film (in English) here.