Into The Great Blue Yonder

Yesterday, after spotting an “as yet UFO” over Finnsnes, a quick search of our local newspaper’s website revealed almost identical photos to mine sent in by others, and a visit to the NRK (Norway’s public broadcaster) turned up a story about unusual lights in the sky over the island of Svarlbad (about 1000 km / 600 miles north of us).

It turned out to be a 21m / 65′ rocket (well spotted Pete Dubay), launched from Andøya Space Centre. Yes that’s right, Norway too is in the space race, and the equivalent of Cape Canaveral is about 60 km / 40 miles away. I should really have thought of it straight away as Susanna has visited as part of her physics course.

Whilst it was a peaceful mission, the rocket in question (a C-REX, yes really!) was carrying a ‘nuclear payload’ as part of a study into daylight aurora, which of course you can’t see. I’m still trying to find out if the same researches have decided if grass is green in the dark, etc. There are some mission photos here (not mine, I haven’t been to Svalbard. Yet).

Sadly, not all missions from the Andøya Space Centre are successful. In September last year (2013), residents of nearby town Andenes got a bit of a surprise when a rocket came down in the sea just outside their harbour. An article with pictures is here.  The Space Centre’s spokes person said he didn’t know what went wrong – the Australian rocket wasn’t supposed to land there! However, having examined the trajectory, I have a theory: maybe it was fitted with some kind of homing device which the Australian manufacturers forgot to recalibrate for Norway . . . and therefore the rocket was simply taking the shortest route home: The local residents and the mayor were not impressed and they want answers. I am considering emailing them my theory, and the other possibility tyngdekraften – GRAVITY (literally heaviness power).

Out Of A Clear Blue Sky

On the way into the office today there was a sudden intense white light in the sky. What passes through ones mind?

In the few seconds it took to get the camera out, the light disappeared, leaving only a ‘scribbly’ white trail, with a large gap between segments. 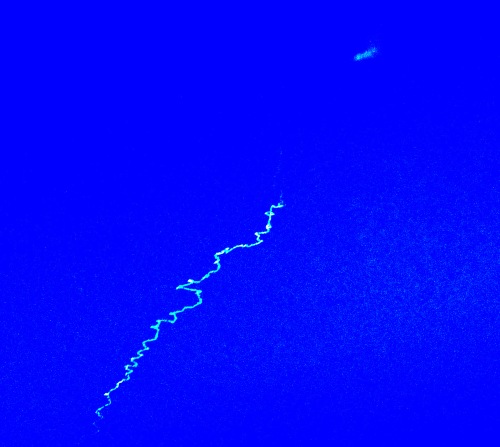 Come back tomorrow for the real explanation (none of the above)!

This week it was announced that well known pianist and entertainer Reginald Kenneth Dwight (AKA Elton John) will play two gigs in Norway next year. Sadly we probably wont get to go (too far south and with tickets costing 125 GBP / $185, it’s a bit pricey!). Uansett (regardless / even so), the title of this post doffs it’s hat to Reggie. The only difference is that Saturday night (yesterday) was not a good night for fighting, but rather for some very good northern lights.

Also, Elton, if you’re reading this, all pictures on this site are available for sale (I know you recently gave free tickets to a Norwegian photographer for this picture of a shoal of fish, flash frozen in ice)!

The island of Senja is separated from the mainland by a stretch of sea known as Gisundet, which means ‘the crooked strait’ (if that’s not a contradiction in terms!). We spend a reasonable chunk of time driving beside it, both on Senja and the mainland, as these roads are the main routes to the majority of the church buildings outside of Finnsnes.

So it was that on Sunday morning I drove out to Lenvik kirke in Bjorelvnes, north of Finnsnes, on the mainland side. We’ve had quite calm, cold weather recently which has led to the formation of slow moving sea fog in coastal areas – very picturesque, unless you’re under it, when it’s dank and dreary. Here are some pictures:

The beginning of mørketid (the dark time / polar night / the period when the sun doesn’t rise), whilst scientifically calculated is in reality a bit of a moveable feast due to the mountains. At our apartment the sun made it’s last appearance on Friday. I took these pictures on Thursday as we sat and ate breakfast with the sun rising, before going to work (a rather late start, about 11.25!).

Later in the day this was the post-sunset view from the offices: 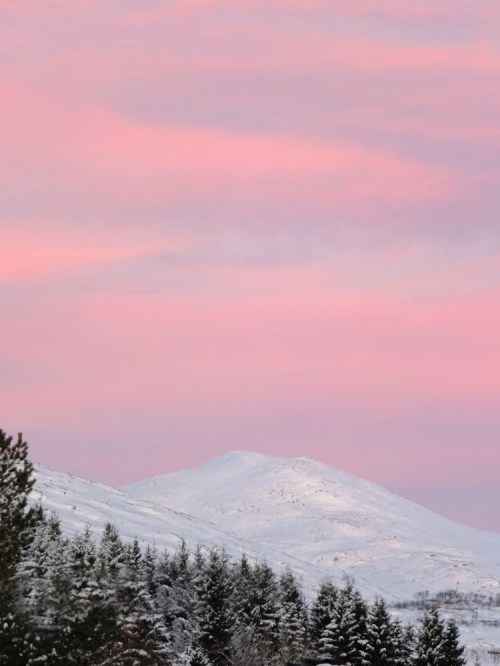 Other places begin their mørketid on different days.

Earlier in the week I played for a funeral in Lysness. These are pictures from journey, with the characteristic yellows and blues of this season:

Back in October we visited Eldorado,  which, contrary to popular opinion, is neither in South America, nor the deserts of the USA, but is in fact in Hamnvik on Rolla, the wettest island in Norway!

We encountered it quite by accident. The real reason for our visit to the town was as ‘working’ guests at a baptism service, conducted by a friend, Sigurd Hanson who døpt (baptised) one of his aldrebarn (great grandchildren) in Ibestad kirke (Hamnvik, Rolla). Organ geeks can find out more here. It’s actually a rather fine, if incomplete, instrument (none of the reeds are installed). There were several other chunks of old instrument lying around on the gallery, which was a bit peculiar. The church building itself is seriously over sized for the local population but was originally intended as a kind of small cathedral for the surrounding area (up to a weeks walk away!). We were told a rather good story about a funeral cortege which, unable to make it to the church due to bad weather, had to leave the coffin in a tree to avoid loosing it in the snow! Here are some pictures:

Ibestad kommune is a couple of hours drive south from Finnsnes and involves ‘island hopping’. From the mainland one drives over a bridge to Andørja (Norway’s most mountain rich island – a small area with 7 peaks over 1000 m / 3300′), and then through a tunnel under the sea to Rolla (Norway’s most water rich island, which means it has the highest proportion of it’s flat land surface covered with water – apparently).We were also advised to wash our car afterwards, because the tunnel leaks concentrated salt water.

We were very thankful that there wasn’t any snow as the last half hour was on a mostly single track road with lots of switchbacks, blind summits, and long stretches with no barrier between the road and the sea below.

Here are the some pictures taken just before the bridge from the mainland to Andørja:

Two weekends ago (yes these posts are getting out of order) we attended an Alpha Course leaders course in Tromsø. A great weekend of teaching and fellowship, but unlike the last trip, no sign of north lights this time.

Sadly, staying in a city centre hotel on 31st October meant there was quite a bit of noise from Helloween revelers. This is not a festival which used to be celebrated in Norway (all souls and all saints however were), but sadly as the country becomes more Americanised, it’s gaining popularity. There is a sort of non-religious push by some to replace it with Hellovenn (Hello = hello, Venn = friend): still in costume but trick or treating is replaced by shaking hands and exchanging bucket loads of sweets. Hmmm . . . .

Just as we were leaving Finnsnes to travel, we were treated to a beautiful views over Senja:

As part of the preparations for the Arvid Hannsen Festival concert tomorrow in Finnsnes Kirke I took a trip to meet Arne Ivar Hanssen, Arvid’s son, who will be reading some of his fathers poetry between the music. We agreed to meet at Nordvindshagen (north wind’s garden) in Brøstadbotn, in Dyrøy kommune. I’ve never visited there before, and the drive was beautiful, heading south from Finnsnes. We’ve had snow on and off for the past couple of weeks and the light is starting to get ‘weaker’ as we approach mørketid (the dark time / ‘polar night’), which often produces pastel blues, greys and yellows, so that views look almost like paintings:

Nordvindshagen is a building erected almost as a posthumous ‘living memorial’ to Arvid Hanssen and his work. It houses the public library, a performance space, a small exhibition about Arvid Hanssen, as well as meeting spaces. The curtains / blinds are printed with his poems, a granite slab on the entrance hall floor is inscribed with another poem and a facsimile of his signature, and in the library area there are a selection of his original manuscripts, some of the paintings and line drawings used to illustrate his works, news paper articles, etc.

The outside of the building also has poems on the walls:

Here is Arne Ivar, the quiet, hospitable and kind driving force behind the centre:

We’re looking forward to working with him tomorrow!

These were some of the views from the journey home:

A quick ‘advert’ for a concert on Sunday (if you’re in the area)!

Arvid Hanssen is perhaps the most ‘son’ of Finnsnes – a renown local poet and author. The town holds an arts festival each year in his honour and our concert is the final event in the 2014 festival. We are privileged to have Arne Ivar Hanssen with us to read some of his father’s poems.